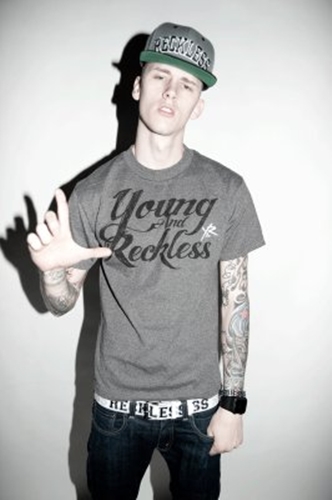 Born and raised in Cleveland Ohio, Machine Gun Kelly is an up and coming artist who is hitting the scene at a fast pace as of late. Richard Colsan Baker received his lyricist name, because of his rapid fire type of flow that hits you so fast you end up wanting to replay the song to fully understand it. Best known for his three mix tapes, Lace up, 100 words and Running, and Rage Pack he his making a statement in the industry.

The reason he even started to rap was he ended up with a kid at a young age, got fired from his fast food job, and ended up being homeless. Him and his friends decided to let their talents shine and build their success from the ground up. Taking popular beat and making it his own, and recording recording booth built in his friends house, which he likes to call the "Rage Cage," he started to get attention of fellow Cleveland people. With the talent everyone saw in front of their eyes they decided to get him out to NYC to perform at the Apollo Theater. He went and performed his material, and became to be the first white rapper to win a contest at the Apollo in 2009.

Finally getting the exposure he felt he deserved to get, he was offered the opportunity to to premiere on MTV's SuckaFree Freestyle show. Presenting a verse from his go to song "Chip Off The Block" it was his television debut. While staying true to his dream, he kept coming out with videos to advertise himself to the public. P-Diddy finally got his eye on him and wanted him to sign to his label. So he flew him over to sign with Bad Boy Entertainment. This being his first label he signed, MGK finally reached what he wanted all these years. His video "Wild Boy"  was his 1st televised music video. I want everyone to keep their eye out for this artist because i promising him to rise to fame and be a big start in this industry.