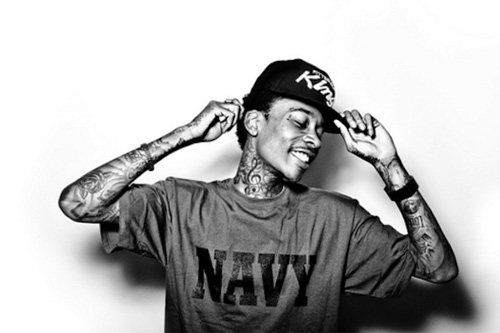 Born in Pittsburgh Pennsylvania, Wiz Khalifa was born into a family where both his parents were serving in the military. Due to a divorce Wiz had to move constantly because of the military duties his parents had. Living in the United Kingdom, Germany, and finally settling back in Pittsburgh. He loved music and decided to pursue it right out of high school. He came up with the name Khalifa because it is the Arabic term for successor and wisdom. Which was shortened to "Wiz" during his early stages in his life and this played off the word wisdom. 2005 -2008 he combined the nickname wiz and khalifa together which created his name he still used today. He put out self albums just to try and get his name out there. He didn't really hit the scene until 2009 with his album Deal or no Deal. Here is when he introduced himself as being much more lyrically gifted and playful. This album included songs such as In the cut, This Plane, and Name on a Cloud, which were all hits from the start. He also introduced a new group he was working with which was called Taylor Gang. Everyone putting their lyrical gifts together they were able to make it the big scene with Wiz Khalifa as the the leader of the pact. The song black and yellow which was a song to represent his love for his hometown Pittsburgh put him at the top of the charts. Every time flipping to a radio a station or music channel this song was playing non-stop. The success he had gave him enough publicity to put out his next album released in 2011 titled Rolling Papers. Ever since Khalifa has risen above or below the hype he once had. Still very well known, he will continue to make a splash in the game for years to come.